Argentina has a very varied relief and covers a large part of the Southern Cone. The country is divided into the following main regions:

The name Argentina is derived from the Latin name “argentum” which means “silver”, “plata” in Spanish. The history is associated with the “Rio de la Plata”, the river of silver. Indeed, when the Spaniards arrived, they were looking for this gold.

Pre-colonial era: Before the Spanish conquest, many Amerindian tribes lived in Argentina, among them the Mapuches, the Pampas, the Chonks etc.

Spanish colonization: In 1516, Juan Diaz de Solis discovered the Rio de la Plata when he arrived on the Argentinean coast. A whole period of colonization followed and a succession of waves of immigration from all over Europe in the 1880s. At the beginning, it was only men who arrived on the new continent and lived in the outskirts of the big cities, from there the tango was born, which is now inseparable from the culture and history of Argentina. Indeed, the tango is described as “a sad thought that is danced” and refers directly to the nostalgia of happiness and loneliness of the newcomers. At the time, this dance was rejected by the bourgeoisie. Today, it is one of the symbols of the Argentine national identity and since 2009, it has been registered as a world intangible heritage by UNESCO, which helps to perpetuate this emblematic dance.

The Argentine cuisine is very famous in the world. The quality of the meat that is found in many typical dishes such as bife de chorizo, de costilla, ojo de bife, tira de asado or the “pastel de carne”, the minced meat with green olives and spices. Literally, you can find meat on every corner, the locals love “asados”, barbecues with family and friends! It is a very popular practice and for all occasions. National statistics estimate that Argentines consume an average of 70 kg of meat per year. During your trip to Argentina, you will find the following dishes: 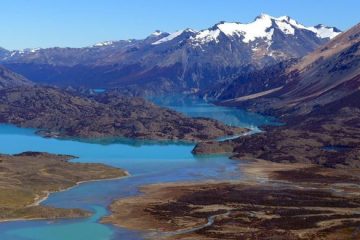 Ruta 40 from Bariloche to El Calafate

13 days / 12 nights Discover Patagonia at the wheel of your own 4x4, from Bariloche to El Calfate. You

MUST-SEE PLACES OF THE DESTINATION

Buenos Aires, the capital of Argentina, is known as the metropolis lost between the ocean and the southern lands. The city is a mixture of European heritage and Latin American traditions. Walking between the bohemian neighborhood of La Boca and the chic neighborhood of Recoleta, you will appreciate the city of a thousand faces. With a tango tune and a few dance steps, the city transports you and makes you discover the rhythm of life of the buenos-airians or “portègnes”, literally “the inhabitants of the port“.

The city of Mendoza is known for its many wineries that are of increasing interest to wine consumers around the world. Indeed, the quality of Chilean wine is becoming more and more renowned and is now found on many tables. Take advantage of the Mendoza region to explore the surrounding mountains and nature on foot or on horseback!

Iguazu is one of the most beautiful falls in the world! Wider than Victoria Falls and higher than Niagara! There are 275 of them, spread over 3km on the border between Brazil and Argentina. Declared International Heritage Area by UNESCO in 1986, the falls were also used as a set for the movie “Mission” or for Indiana Jones in “The Kingdom of the Crystal Skull”.

The famous city of Ushuaia also called the capital of Tierra del Fuego, or “the end of the world” because it is the southernmost point of South America. It is often the departure and return point for cruises and excursions to Antarctica. Don’t miss the neighboring island of Yeca Pasela, known for its colony of penguins that reside there all year round.

Argentina’s famous Route 40 is one of the longest in the world and also one of the most beautiful places in Argentina. To take the route 40 and go down to the southernmost point is to take the time to discover the landscapes and the vacations! As the climate and terrain change as you travel, driving this route will leave you with wonderful memories. This is probably one of the best ways to visit Argentina!

Located in the Andes Mountains and in the Lerma Valley, the city of Salta is known as “la linda”, which can be translated as “the beautiful one” with colonial monuments, such as the Salta Cathedral and the baroque and neo-classical church of San Francisco. This city is described as both young and traditional in a beautiful natural setting. The high mountain archaeology museum is also worth a visit, with very well preserved Inca mummies.

The city of El Calafate is located in the province of Santa Cruz, in Argentine Patagonia. The region is characterized by a thorny shrub called the boxwood berberis.  Not far away is the Los Glaciares National Park, on the border with Chile, known for its mythical peaks of Fitz Roy at 3405 m of altitude or Cerro Torre at 3,102 m of altitude. The whole park is protected and is the habitat of Patagonian hares, huemul, a typical Argentine deer.

Located in the region of Mendoza, it is the highest point of the Andes mountain range, the Aconcagua measures 6962 m of altitude. For those who love summits, it is possible to climb it, although it is one of the most difficult in the Latin American continent, but it offers a magnificent view of all the snow-covered peaks of the Andes on a clear day!

Argentina is a land of diversity and the call of nature, do not hesitate to cross the Atlantic to discover the wonders of this country!

To travel to Argentina or Patagonia, please consult our travel offers or ask us for a customized trip, we will be happy to tell you more about the destination and propose a tour that meets your desires and expectations. See you soon in Argentina!