The Peruvian cuisine rhymes with diversity and a mix of flavors between an Inca and Spanish heritage. Renowned throughout South America, Peruvian gastronomy is increasingly in vogue, especially carried by the chefs Virgilio Martinez or Gaston Acurio. Here is a list of some of the dishes that you can find during your trip to Peru:

The great diversity of potatoes, corn and quinoa in the Andes is also considerable and an integral part of the culture and daily life of Peruvians. There is also a richness from the Peruvian Amazon with a variety of fruits and vegetables, including limes, avocados, papayas etc. Peru is also a great producer of coffee and cocoa.

As you can see, most of the traditional dishes include meat or animal ingredients, but it is quite possible to prepare meatless dishes. Many restaurants offer vegetarian or vegan alternatives.  To discover a selection of restaurants and gastronomic recommendations, do not hesitate to consult us! We also recommend a gastronomic city tour (https://pasionandina.com/city-tour-gastronomique-a-cusco/) or a cooking class with a chef to make your own Peruvian dishes! At Pasion Andina, we believe that travel is also about taste, smell and the senses in general.

21 days / 20 nights Visit of Lima, city of the Kings - Experience in the heart of the Peruvian 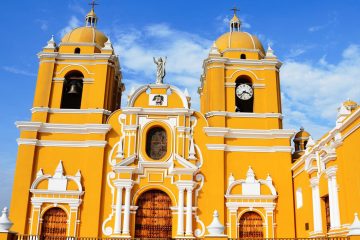 Wonders of the North 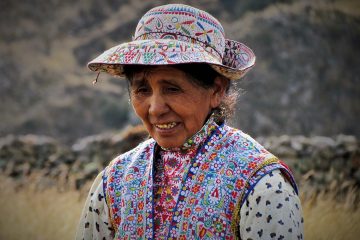 Wonders of the South

Highlights! Visit of the Ballestas Islands - Flight of the Condors to the Colca Canyon - Stay on the Titicaca,

Visit of Cusco and the Sacred Valley - Discovery of Machu Picchu, one of the New 7 Wonders of the

Highlights! Experience aboard the mythical "Tintin train" from Lima to Huancayo - City Tour in Lima, the South American capital

Machu Picchu, of course! The most famous of the Inca citadels and also the most impressive, it means “the old mountain” in Quechua. The archaeological site is registered on the list of UNESCO since 1983.  To go there, several options are possible: to take the train from the station of Ollantaytambo or to walk from the station of Hidroeléctrica or by the famous path of the Inca.

Cusco, the imperial city, which is also called “the navel of the world”. The city offers both cultural activities as the visit of the main monuments of the Plaza das Armas: the cathedral, the Quechua museum, the Choco Museo, the amazing history of the Quechua streets of Cusco . You can discover the amazing peruvian food during a gastronomic city tour.

The Sacred Valley is the path that leads you progressively to Machu Picchu: among the most important sites are Pisaq and Parque de la Papa to learn more about agriculture and the way of life of the communities. The opportunity also to make Maras – Moray on foot to discover the salt pans of the village of Maras as well as Moray, the Inca laboratory. Take a walk between the city of Chinchero and Urquillos to have a wonderful day in the Sacred Valley!

Lake Titicaca is the highest navigable lake in the world, located at more than 3800m of altitude, the opportunity to immerse yourself in the history of the Inca Empire, Tawantisuyo and its origins and make your imagination work, all at the rhythm of life of the communities on the totora, on the Peruvian or Bolivian side.

The 7 colors mountain is a natural formation that creates bands of colored sediments. Due to climate change, more and more colored mountains are appearing in the country as well as along the Andes Mountains, such as Palcoyo. You can also discover the Waterfall of Perolniyoc!

Lima, the Peruvian capital will be your arrival point in Peru and the meeting point with the Pacific coast. It is also called the “gray” because its sky is not often clear outside the summer (from December to February). This metropolis is often criticized for its traffic, but it is full of cultural treasures such as the Larco Museum, the visit of the Barranco district or the Plaza Mayor in the historical center.  Lima is famous for its gastronomy: the opportunity to taste a good ceviche and drink a pisco sour or local specialties.

Peru is a land of diversity and the call of nature, do not hesitate to cross the Atlantic to discover the wonders of this country!

To travel to Peru, do not hesitate to consult our travel offers or to ask us for a customized trip. We will be delighted to talk to you in more details about the destination and to offer  you a tour that corresponds to your desires and expectations. See you soon in Peru!