The country is marked by its diversity of landscapes between the different regions and is a land of contrast between the high snowy peaks, the beaches with crystal clear water, the density of the Amazonian forest, or the large urban cities like Quito.  Ecuador is divided into several distinct geographical areas:

At the present time, the country’s economy is based on the export of bananas, oil and tourism. There is a great abundance of resources but the country has difficulty in developing, especially in relation to international debts.

Ecuadorian cuisine is mainly based on potatoes, bananas, manioc, yuca, rice and lentils, although all regions have different specialties. The portions are generally very generous and with ingredients from local agriculture with Spanish influences. Here are some recipes to discover during your trip to Ecuador, in order to taste the diversity of flavors: 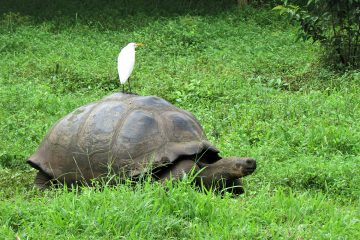 One week in the Galapagos

One week stay in the heart of the Galapagos Islands archipelago: live a waking dream in this incredible natural paradise.

MUST-SEE PLACES OF THE DESTINATION

Quito is a vibrant city with a mix of colonial and contemporary styles and impressive landscapes, especially with the great snow-capped peaks that surround the city. The historic center has been a UNESCO World Heritage Site since 1978 thanks to its countless churches, theaters, monasteries and convents. Take advantage of a city tour to immerse yourself in a remarkable history and take a break in one of the many bars and restaurants to soak up the history and atmosphere of the Ecuadorian capital.

Culminating in 5897 m of altitude, Cotopaxi, located in the south of Quito, is the high active volcano of Ecuador. The locals are marked by the eruption of 1877 which destroyed many towns and valleys. At present the volcano and its national park are protected. In Quechua, the coto-paxi means “shining mass” for its dominance over the capital.

The Galapagos tortoises of the archipelago give their name to these islands on the Pacific coast of Ecuador.  This region is considered to have the greatest concentration of endemic species in the world; in fact, there are more than 2000 species spread over the different islands of the Galapagos archipelagos, especially the island of Santa Cruz. The fame and the beauty of the place are no longer to be proved, but the place remains fascinating and reminds us how important it is to preserve nature..

Cuenca is a relaxing city in the Andes. You can stroll through the colonial city center with its markets, churches and its old cathedral.  The climate of the city is very pleasant and allows you to spend a nice evening in one of the many bars or restaurants of the city.

Baños, which is considered the capital of volcanoes and waterfalls in Ecuador, is also the capital of extreme sports because of the various outdoor activities such as bungee jumping, parachuting, canyoning, zip-lining, etc. In this region there is the waterfalls route which allows you to observe nearly 60 waterfalls! It is possible to go there with an old truck called “chiva” or by bike or on foot.

At the end of the day, let yourself be tempted by the thermal baths of the city for a relaxing moment.

The Laguna Cuicocha is one of the highlights of your trip to Ecuador. It is said that the clear waters have the ability to change color occuring between turquoise and emerald blue. Around it, you will discover an incredible fauna and flora that will allow you to appreciate the place as a whole. It is possible to make a day hike to the lagoon or to consider a trek over several days to discover the surroundings.

Ecuador is a land of diversity and the call of nature, do not hesitate to cross the Atlantic to discover the wonders of this country!

To travel to Ecuador, do not hesitate to consult our travel offers or to ask us for a customized trip, we will be delighted to talk to you in more details about the destination and to offer you a tour that corresponds to your desires and expectations. See you soon in Ecuador and the Galapagos!